by Only Now, Beneath The Ruins 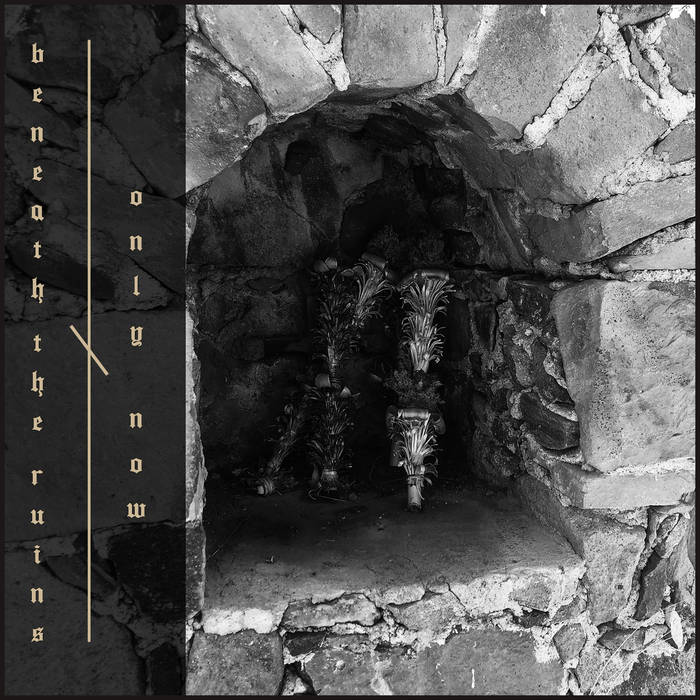 The product of contrasting ideas & components, this first Only Now & Beneath The Ruins collaboration is nevertheless a coalition where parallel worlds meet. Compiled from recording sessions captured at Arora/Arensdorf's homes in 2019 & 2020, they indicate the development of a symbiotic creative partnership.

Here, Arensdorf’s intimate guitar meditations are framed by Arora’s seismic, cavernous treatments, evoking the open landscapes & haunting liminality of the desert ghost towns found in the duo’s home state of California. There are traces of Dylan Carlson & Earth’s searing drone odysseys as well as Robert Rich’s high-resolution soundscapes, reflecting a uniquely Pacific Northwest milieu. Yet even if the imprints of this lineage are present & correct, Arora & Arensdorf have their own distant horizons in mind.

In a convergence of miasmic, atonal dub & abstract, existential Americana, Only Now & Beneath The Ruins outlay an exchange of sonorous fretwork, broiling feedback & thunderous sub-bass across seven tracks, depicting a sparse canvas of solitude & wilderness.

Powerful & apocalyptic in tone, Only Now & Beneath The Ruins conceive a series of blasted transmissions from peripheral frontiers. A melancholic, revisionist Spaghetti Western for end times.

About Kush Arora:Only Now is the visions of Kush Arora, based in Berkeley, CA addressing issues of time, existence, and the beyond. His sound is an unremitting emission of razor-sharp up-tempo rhythms, deep space isolationist electronics & primal channelings. Only Now has released EP's with Infinite Machine (MEXICO), Discrepant (Lisbon), and Polaar (FR) recordings, and performed at MUTEK, and alongside artists like Equinoxx and Kode 9. This release is the first of a flurry this year, including upcoming tracks for Hakuna Kulala (Nyege Nyege Tapes sub label, Uganda) and Bokeh Versions (Bristol), lending his hands in riddim production. Kush has been producing under his name for 19 years, blending indo caribbean sounds into his own dancehall, dub, and industrial interpretations with labels such as Dutty Artz and artists like Gappy Ranks.

About Peter Arensdorf:Beneath the Ruins is the solo project by guitarist/bassist, Peter Arensdorf, living in the Bay Area drawing musical influence from disparate sources and with an unrelenting quest for new sounds and textures.
Along with his collaborative works he’s also plays and writes for the doom band King Woman (Relapse records) and has graced the stages of Roadburn, Pop Montreal, and toured with acts such as Russian Circles and Oathbreaker.
His upbringing and influences range from traditional guitar innovators like John Fahey to the experimental works of Glenn Branca and Sonic Youth to the hypnotic writings of Dylan Carlson and Earth.

Only Now is the time.
Music by Kush Arora

Bandcamp Daily  your guide to the world of Bandcamp